The Lord continued to move through the Houston's First family as He lead even more people to give to the World Mission Offering after the final total was announced. After we "closed the books" on this year's offering, the total amount given came to $2,922,230.

Thanks to the overwhelming and continual generosity of our members and guests, we were able to provide funds as follows to these organizations and missional causes:

Our original WMO budget called for $1,400,000 to be given to denominational organizations. Instead, we were able to give beyond our goal to these three entities:

Our church family's generosity toward the WMO also enabled us to support a wide variety of ministries and missional causes in Houston and around the globe:

Houston's First raised a record $2,922,230 to support missionaries through the World Mission Offering!

Here's what we originally posted about this year's World Mission Offering results — including an update to the total that was announced on Easter Sunday:

We did it, Houston's First family!

Once again, the Houston's First family came together to show our church's support for missionaries who are sharing the Good News of Jesus in Texas, the United States, and around the world!

The World Mission Offering — given beyond our regular tithes — is an annual offering received by the church. Our goal in 2021 was $1,400,000 with the funds to be given as follows to missionary-sending organizations: 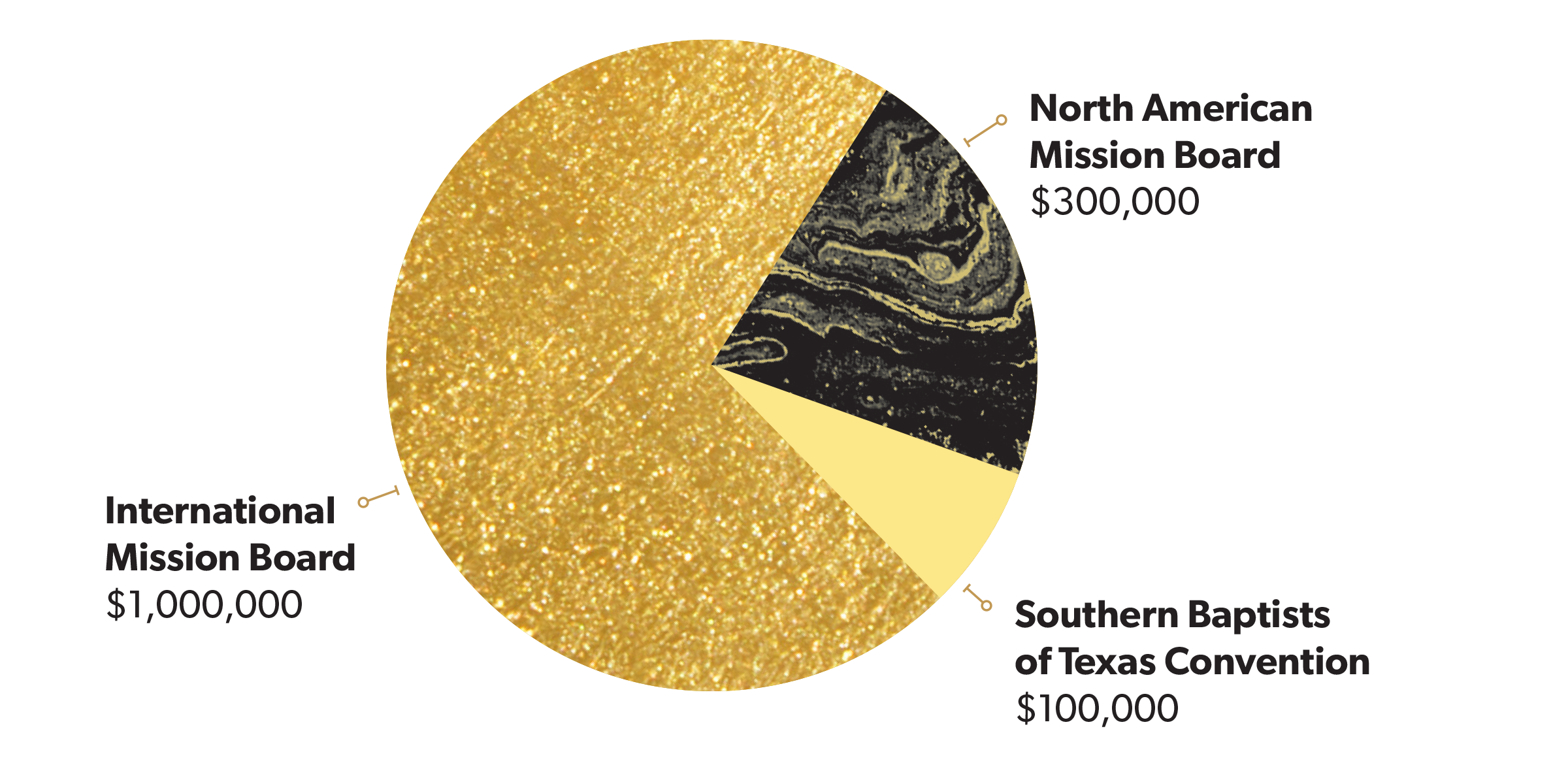 Originally set for Sun, Feb 28, our day of giving was rescheduled due to the devastating winter storm that struck Texas in mid-February. While we turned our attention to help those impacted by the storm, we set Sun, Mar 28 — Palm Sunday — as this year's day of giving.

When the donations were tallied, the Houston's First family had given $2,628,946 — surpassing our goal by more than $1,200,000 and setting a new record amount for this annual offering. Those funds came from 2,820 donors (individuals, couples, or families) — and included 433 first-time givers who had never given to Houston's First before!

Where do additional funds go?

As planned in advance, these additional funds will now be distributed to different ministries and causes that are passions of Houston's First:

What about the even more additional funds?

If you add it up, you'll see that our church family generously gave even more than what was needed to cover those additional projects! So, what will happen with the remaining funds — over $500,000?

Church leaders are praying and seeking direction on where God would have us direct the additional funds. There are numerous ministries and causes that Houston’s First is passionate about, and we are so fortunate to have a generous church family that enables us to provide financial resources where needed!

"Even after a challenging year when we often had to 'do church' differently and when our church members had obstacles to overcome in their own lives, the Houston's First family once again rose to the occasion," said Pastor Gregg Matte.

"We've talked about the importance of being united as a church whether we were on campus or online. This year's World Mission Offering is a clear example of how we as a church are truly better together when we rally behind a cause. When our faith leads to action, the Houston's First family can have a difference-making impact with ripple effects around the globe and for all of eternity as lives are changed for the Gospel."

The World Mission Offering is just one way that Houston's First supports missionaries and missional endeavors throughout the year. Here are just a few of the other ways our church family is committed to advancing the Good News: