Pastor Gregg Matte and Houston’s First welcome Dr. Stephen Trammell as our next Executive Pastor! His role will be to oversee administrative and operational aspects of our church, shepherd The Loop Campus staff, and meet regularly with our Campus Pastors to ensure alignment and ministry effectiveness at all of our campuses.

Dr. David Self, our current Executive Pastor, has known Stephen for many years. "Through much prayer and discussion, it has become apparent that Stephen is the person to continue the work of Executive Pastor at Houston's First," says David. "He is gifted for this role and has an exemplary record of high-level leadership. Bonnie and I have been together with Stephen and Tonya for multiple conferences over the years, and we enjoy mutual friendship, respect, and vision."

"Tonya and I feel so blessed to get to join God in His activity here at Houston's First," says Stephen. "I am excited to serve as your new Executive Pastor under Pastor Gregg's godly leadership and having the privilege of shadowing David Self as he transitions into retirement at the end of the year. We look forward to serving with you in fulfilling the Great Commission!"

Stephen officially joins our staff on Thu, July 1, and David will retire on Dec 31 of this year. Together over the next several months, they will work toward a smooth transition of leadership, mission, and ministry. David and Bonnie feel that the Lord wants them to continue as members of Houston's First, and they plan to continue serving and teaching in their current Life Bible Study — His Likeness.

We are grateful for God's perfect timing and for providing our church with a servant leader like Stephen to serve as our Executive Pastor!

What Others Say | About Dr. Stephen Trammell 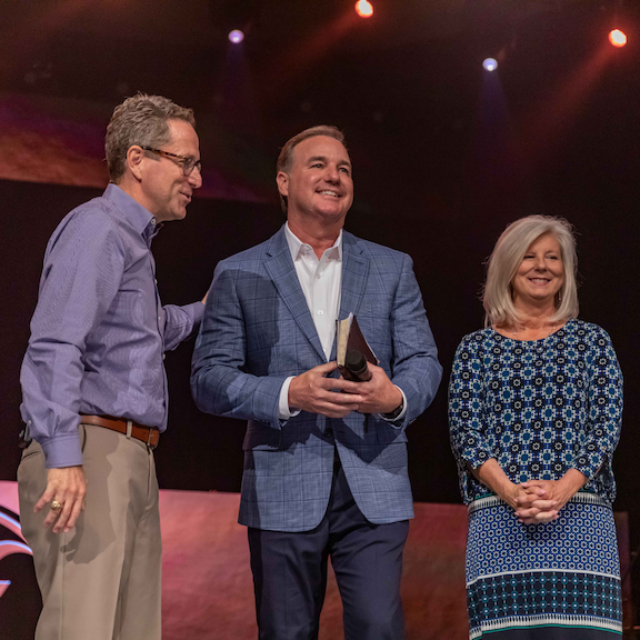 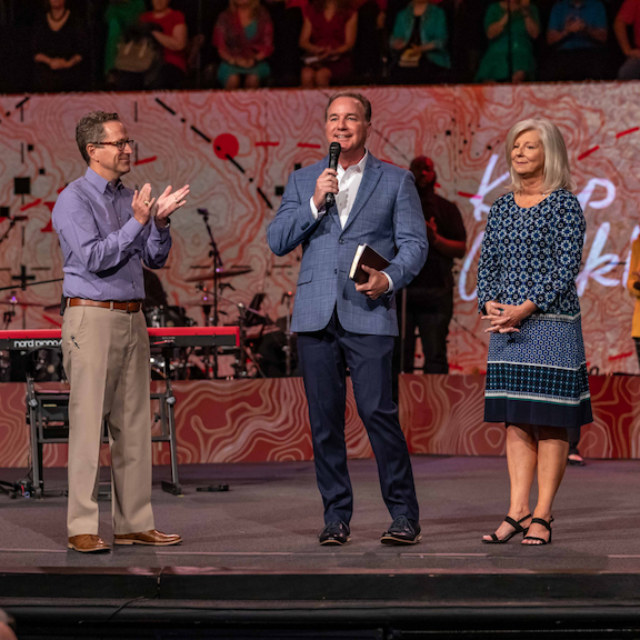 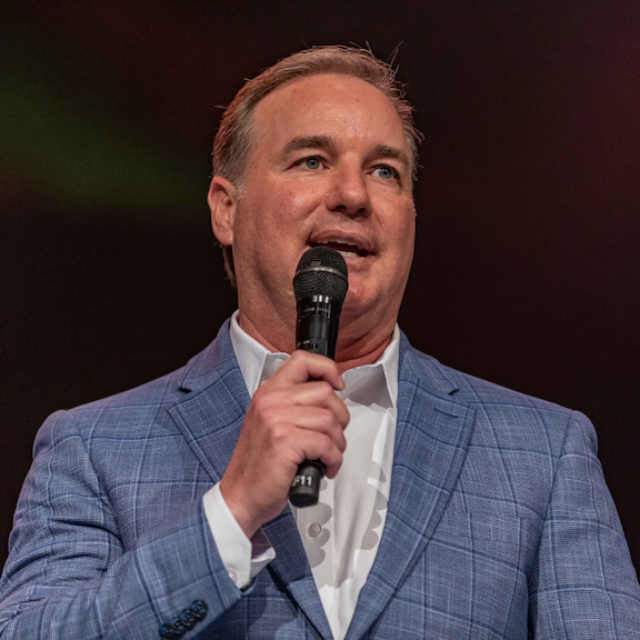 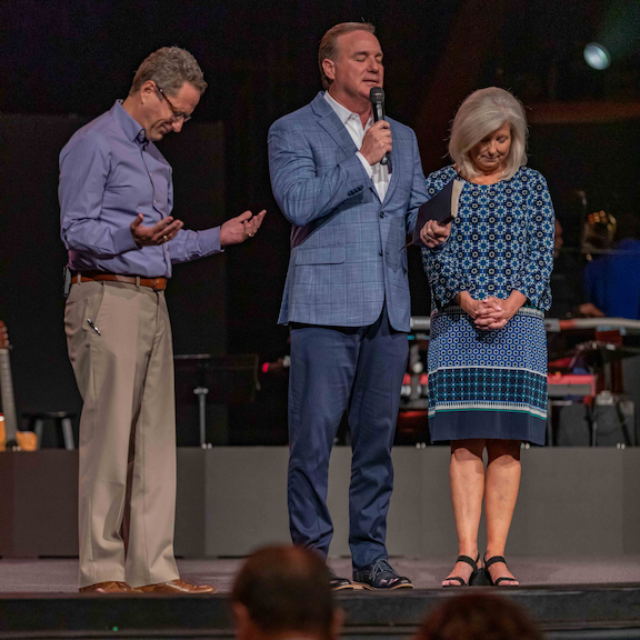 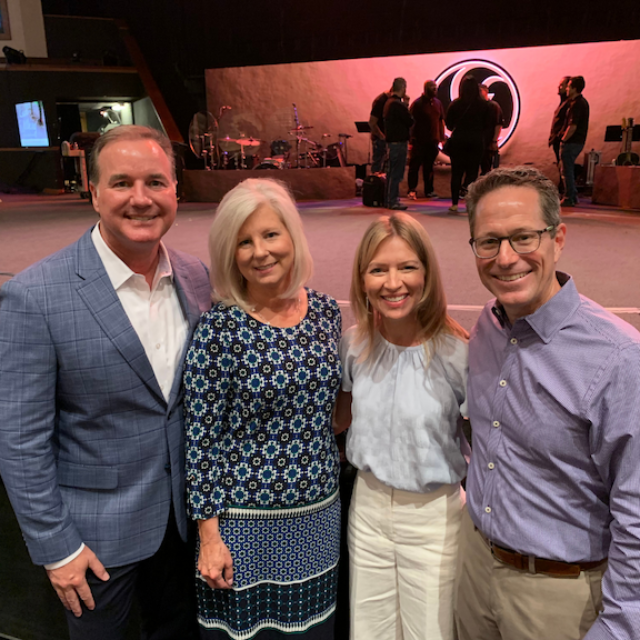 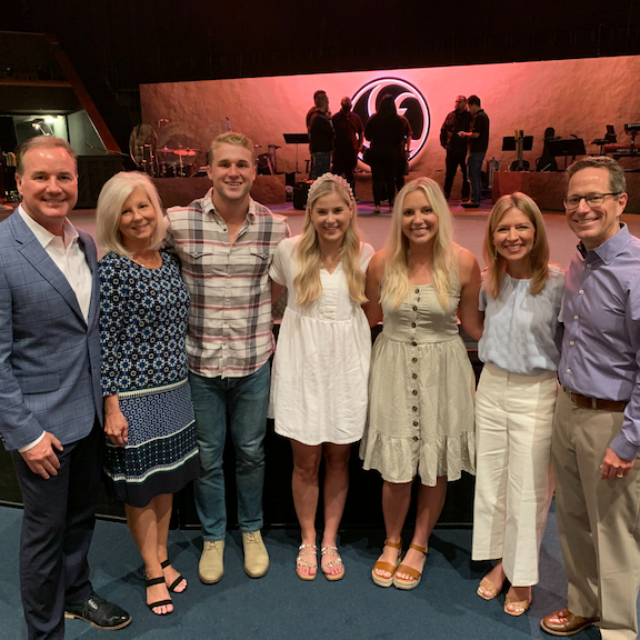 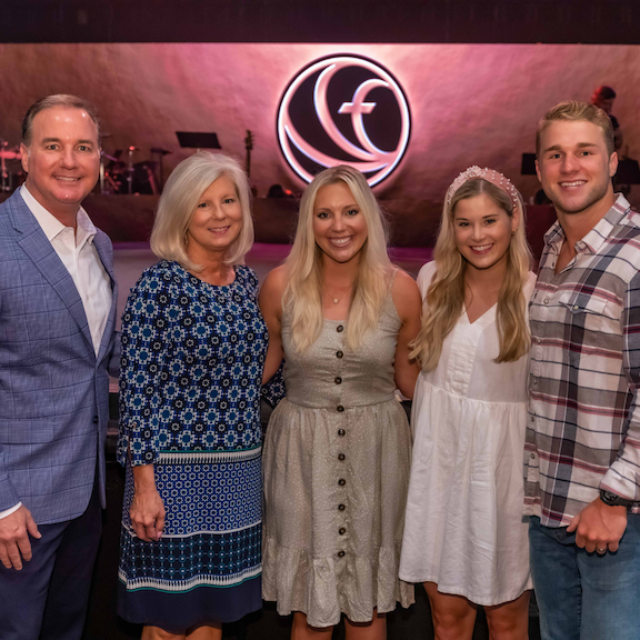 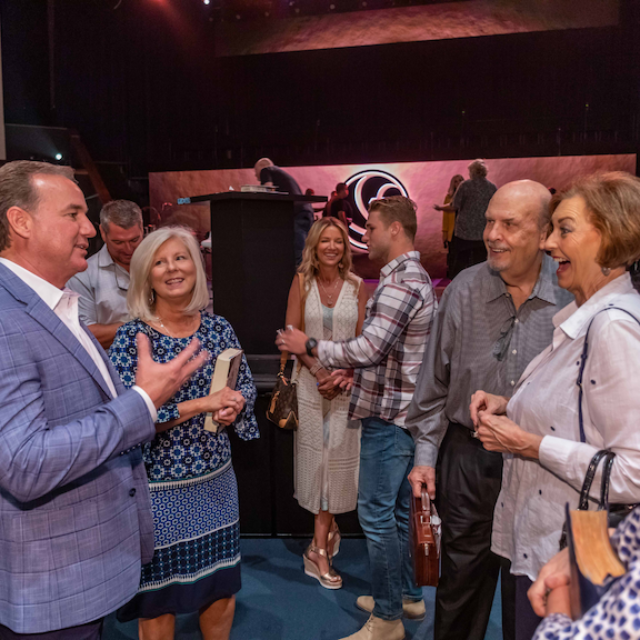 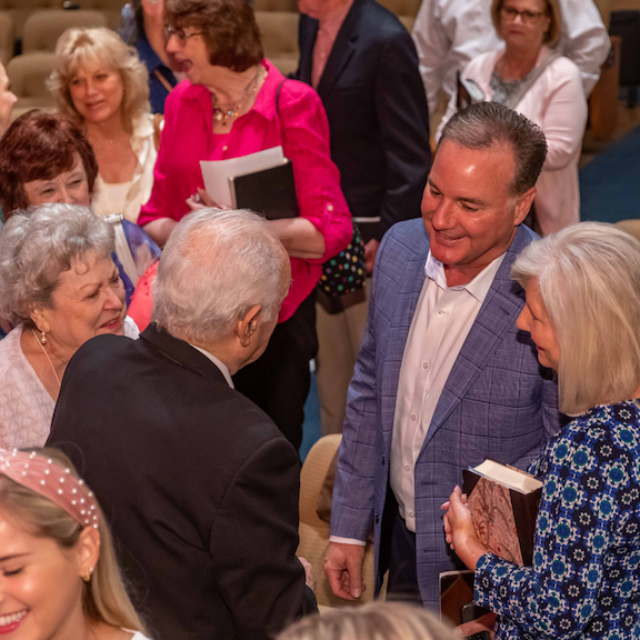 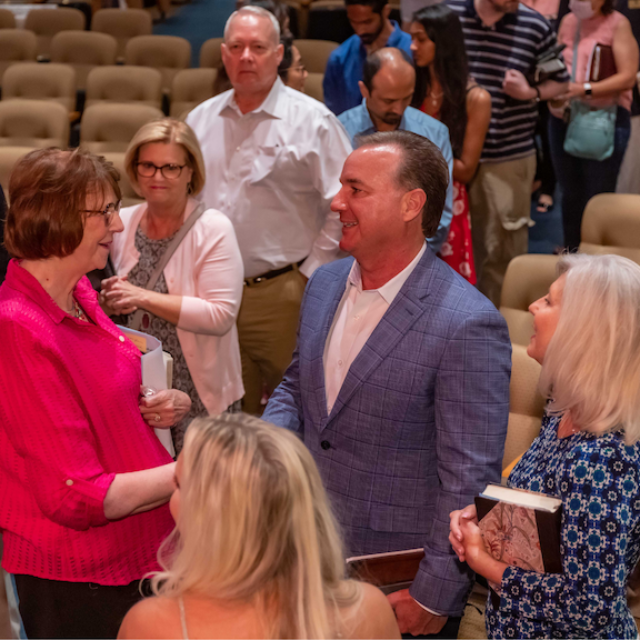 "I have known Stephen Trammell and his family for over 13 years. Stephen is one of the most organized and Godly men that I know. My family have been in several churches as we made job moves over the years, and seldom do you find a pastor who is an excellent pulpit preacher as well as an excellent pastor. Stephen Trammell fits both of these roles in excellent fashion."
— Ken Barrett, Deacon | Champion Forest Baptist Church

"Stephen Trammell is a servant of Jesus Christ helping you place your "Yes" on the altar and preparing you to serve when God picks up your "Yes" to do His will in your life!"
— Matt Ligon, Deacon | Champion Forest Baptist Church – North Klein Campus

"It is a joy and privilege to commend my friend and co laborer, Stephen Trammell, to you. Stephen is one of the most humble and professional leaders in his field in the SBC. He has been one of my primary “go to” persons when I had a problem for many years. I deeply love and respect this brother."
— Jim Law, Executive Director/Pastor Relations | North American Mission Board (NAMB)

“Stephen Trammell lives, loves, and leads people from a deeply committed love for Jesus, His word, and His ways. He is gracious, meek, and faith-anchored in every context. If we weren’t utterly in love with and invested in the local body of Christ where we served under his shepherding and leadership, we’d follow him anywhere.”
— Shauna Wallace, Bible Study and Life Group Teacher | Champion Forest Baptist Church – North Klein Campus

"Dr. Stephen Trammell is one of the finest persons I have ever met. He possesses a keen mind, has an incredible passion for working with and helping people from all walks of life, and is a community leader who is held in high esteem. I commend Houston’s First Baptist Church for selecting him as your Executive Pastor."
— Dr. Jim Cain, Retired Superintendent | Klein ISD

I grew up in Alexandria, Louisiana, and became a follower of Jesus Christ on March 28, 1979, just one month before I turned ten years old. God graciously used my parents' divorce when I was seven years old to place me on a journey that led me to a saving relationship with Jesus. The Lord called me to preach my junior year in high school on February 23, 1986, through my near fatal Jet Ski accident. I was licensed to preach on January 11, 1987, and then ordained to the gospel ministry on September 9, 1990, by my home church, Horseshoe Drive Baptist Church in Alexandria, Louisiana.

Tonya and I met our junior year at Louisiana College (she was a cheerleader and I was an observant student). We celebrated our 30th anniversary on January 5, 2021. We have sought to model Christ before our two children, Tori and Austin, and to invest our lives in following Jesus and leading others to do the same!

Global Executive Pastor/Lead Pastor
Champion Forest Baptist Church, Houston, TX
March 2007 – November 2020
The joy of my life in ministry was serving at Champion Forest Baptist Church. My role as Executive Pastor and Chief of Staff continued while I also served as Lead Pastor of our North Klein Campus that was launched on September 15, 2013, as a portable church. After being portable five years and seven months, we built a beautiful new campus on 45-acres of land and transitioned from portable to permanent on Easter Sunday 2019. Hallelujah! During that time, we added two additional campuses, becoming one church in four locations. The Spanish-speaking portion of our congregation grew from 60 to over 3,000 in 13 years. Each of our four campuses had an English Campus Pastor and a Spanish Campus Pastor. All of our preaching venues were live teaching rather than video.
My passion was to lead each campus to reach the people in the shadow of each steeple. We reached the community by reflecting the community God has strategically placed each campus in. We were intentional about embracing diversity and staffing with diversity in mind.
Senior Pastor
Florida Boulevard Baptist Church, Baton Rouge, LA
November 2000 – March 2007
We averaged 600 in Sunday School and 900 in Worship attendance with a budget of $1.9M. I led in developing and implementing the FBBC Vision Statement and Mission Statement and restructured staff to align with the vision. We launched MOVIA Men's Ministry (Men Of Vision In Action). We mobilized our members to serve the underprivileged through our 23 mission sites via Mission Baton Rouge. I had the privilege of leading the church to embrace three distinct Sunday morning worship venues. I taught five semesters of FAITH Evangelism to equip our members to share their faith intentionally. We implemented an intentional process of discipleship including Class 101, 201, 301, and 401.
Senior Pastor
Alpine First Baptist Church, Pineville, LA
June 1998 – November 2000
God blessed with tremendous growth in Sunday School, Worship attendance, giving, and baptisms. We transitioned from one Worship service and one Sunday School hour to ultimately three morning Worship services and two Sunday School hours. The annual budget tripled from $200,000 to over $600,000 in less than two years.
Senior Pastor
First Baptist Church, Folsom, LA
August 1992 – June 1998
This was a special season of pastoring while attending New Orleans Baptist Theological Seminary. I had the privilege of leading the church to build a new Family Life Center where we moved our worship services into after outgrowing the Worship Center.
God also enabled me to bring unity in our community and to embrace the diversity in the shadow of our steeple. We rode the tremendous wave of God moving in the lives of people as they relocated from New Orleans to Folsom.
Assoc. Pastor/Youth
First Baptist Church, Dry Prong, LA
November 1991 – June 1992
While attending Louisiana College...and then moving to attend New Orleans Baptist Theological Seminary.
Senior Pastor
Oak Grove Baptist Church, Rhinehart, LA
June 1990 – November 1991
While attending Louisiana College...Tonya and I got married during this pastorate. I preached Sunday morning, Sunday night, and Wednesday nights. God used this season to help develop me as a shepherd and to learn the discipline of time management for balancing marriage, school, and pastoring the local church.
Student Pastor
Philadelphia Baptist Church, Deville, LA
June 1989 – May 1990
While attending Louisiana College... I got to preach extensively since the church was without a Senior Pastor for the first several months and then I enjoyed the privilege of being mentored by the new dynamic pastor who was a very gifted expository preacher.
Interim Pastor
Lakeside Baptist Church, Pineville, LA
June 1987 – August 1987

I graduated from Bolton High School in May of 1987 and then served as Interim Pastor during the Summer before starting Louisiana College. The church was so gracious to allow me to hone my skills in preaching and shepherding the flock.