Lance Parra, a musician on the Cypress Campus worship team, was born in Hollywood, bought his first guitar at age 10, and ran in circles with Motown stars during his formative years. As a teen, hard living and a car accident threatened to kill his music career — but God had other plans.

“Alcohol, coke, speed, ‘ludes — there were times I didn’t know how I got home,” said Lance. “They were big influences in rock ‘n roll.” During high school, as lead guitarist in a rock band, Lance and his buddies booked appearances in Palm Springs nightclubs where drugs and alcohol flowed freely. The life, while appearing hip and glamorous, took a physical and emotional toll on the young musicians.

“Our lead singer planned a surprise birthday party for his mom, and then he didn’t show up,” said Lance. “They went to his apartment and found he had shot himself in the head. He was a songwriter-poet, barely 20 years old. They read his suicide note at the funeral.”

Within six months of the suicide, Lance went to a keg party where the band’s bass player shot himself while playing Russian roulette. The deaths of the two band members and then the heart attack of their lead guitarist from a cocaine overdose sent Lance reeling.

“The deaths so close together scared me,” said Lance. “I knew this kind of life wasn’t where I needed to be, so I quit taking drugs — cold turkey.” With a clearer head, he began thinking back to years earlier when he went to live with his dad in Oregon. He had taken Lance to a Christian youth rally, not because his dad was a believer, but it just seemed the right thing to do for his son. “I got saved there, but didn’t know that God had a plan for my life,” said Lance.

He and a friend ditched school, and against his better judgment Lance allowed the friend to take the driver’s seat in his SUV. He lost control, fishtailed and rolled the truck several times. With each rotation, the vehicle landed on Lance’s arm, crushing it. “I couldn’t stand up at first,” said Lance. “There was a hissing noise in my head. Blood was everywhere. I finally got up and noticed my arm was bent all the way back at the elbow.”

With Lance being only 16, doctors issued papers for his mother to sign giving them permission to amputate. “They said my arm was damaged beyond repair, but I begged my mother not to sign,” he said. “They replaced the elbow with plastic parts, but expected I’d have little use of it. I wondered if I would ever play guitar again. The doctors were amazed when I regained nearly full use — and was able to play guitar.”

Lance met Julie, who became his high school sweetheart. She attended Palm Springs Community Church, and he began hanging out there to be near her. The Word became truth for Lance when he heard the pastor say that God has a plan for believers’ lives.

The couple married after high school, and Julie’s cousin told Lance about Christian rock, and about an opening he had heard of in another church’s band. Lance joined the band and rededicated his life to Christ, but after just a year, they wanted to move on to a different guitarist.

“I was so disappointed,” said Lance. “They couldn’t even give me a straight answer as to why they were letting me go.” 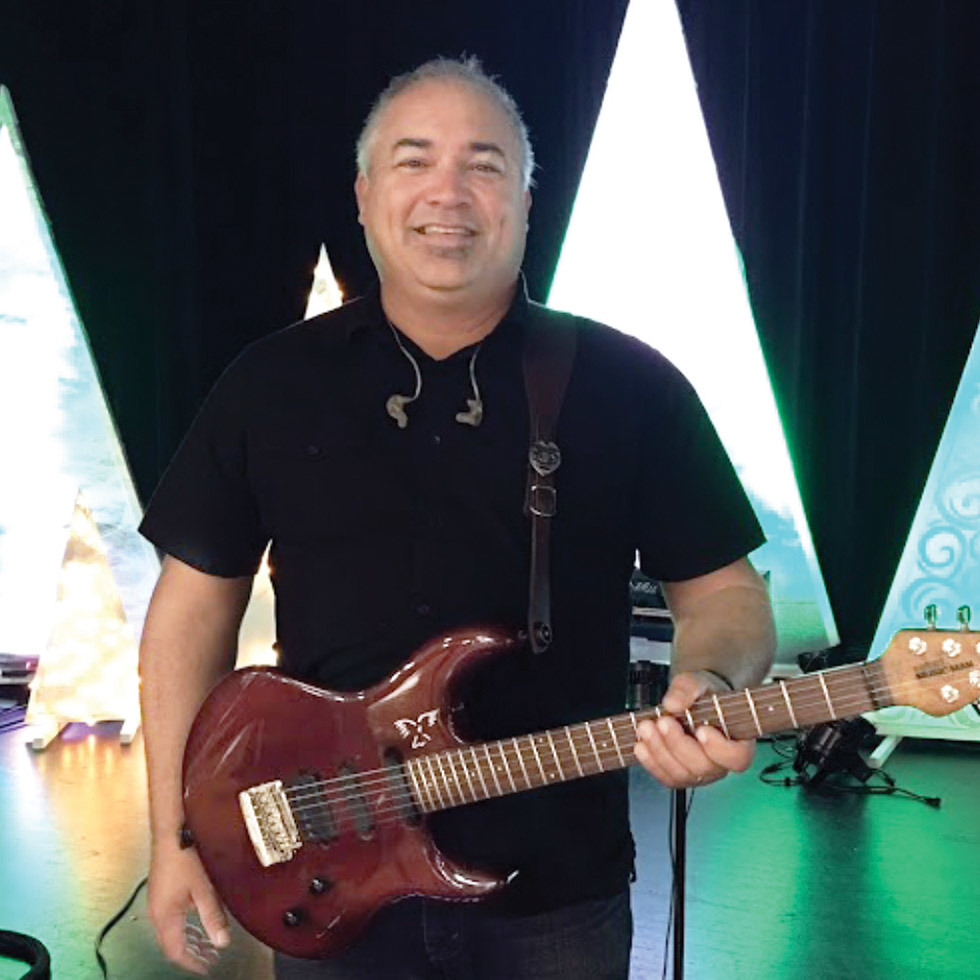 The drummer quit the band and began ministering to and mentoring Lance. Eventually the pair started a new band, Strength, and recorded an album. “Break the Chains” was their first hit, and it received nationwide radio airtime. The two began pre-recording instrument tracks, which allowed them to play live shows with a full sound. Lance plays lead, rhythm and bass guitar as well as drums and keyboards. Their music found its place in Christian stores, on a syndicated radio show, and at outreach concerts they performed for kids.

Times were good until a misunderstanding unraveled the band. Royalty agreements caused Lance to pull all master recordings from radio stations and cassettes out of every store. “Everything came crashing down,” he said. “I still wanted to do music full-time, so I became a studio musician.”

Lance did a solo project in Nashville and eventually he and Julie and two of their three girls moved to Cypress in 2011. So deep was his desire to play music that he briefly joined a classic country band, but “it didn’t feel right to play anything other than Christian music,” said Lance. With a family to support, he began working in another field altogether.

Cypress Campus Worship Leader Michael Brady encouraged Lance to become part of the band playing rhythm and lead guitar. Lance has no doubt that God saved his life, and his arm, for His kingdom. These days, Lance is reaching a new generation of musicians as he oversees the Student Worship Ministry in Cypress.

“My heart is all about saving lives through music,” said Lance. “God made it clear to me many years ago that the reason He saved me — and my arm — is for ministry. The doctors said my arm had been damaged beyond repair, but I’m using it. God did it, and once I began playing Christian music, it all made sense.”