"…the further along we got, the more our hope began to slowly fade away. After more than a year on this empty road, through months of fertility treatments and even a miscarriage, our disappointment had turned into frustration, which eventually led to anger. We struggled with bitterness towards each other and jealousy towards our friends who were getting pregnant easily, often during their first month of trying and some who were not even trying at all." — Justin Ramsey

When Kelley and Justin Ramsey failed to have a child after more than a year into their "baby-making journey," they were surprised to find that Houston, the fourth largest city in the nation, offered precious few resources of emotional support for infertile couples. The rollercoaster of fertility treatments and miscarriage threatened to make them lose hope in ever having a child. But instead of bitterness they chose faith, and God is using their journey in Waiting in Hope, a ministry at Houston’s First whose aim is to comfort and encourage women and their husbands walking through the dark valley of infertility.

The group was formed in early 2012 by Kelley and a kindred spirit who was also experiencing infertility. Several months after the class began, the co-leader relocated to another state.

Justin and Kelley continued seeking God and allowed Him to cover them during each setback, including a scare with breast cancer. The day Kelley went in for biopsies on both breasts she ovulated.

The two-week wait for biopsy results had her "clinging to the Lord," she says. Years earlier, Kelley’s mother had been diagnosed with hormone-receptive breast cancer. "I prayed for the ability not to be fearful," said Kelley. "God gave me the verses Psalm 33:20-23, and as we focused on ‘faith’ and ‘trust’, He drew Justin and me even closer. God gave me everything I needed."

The results came back all clear. And before long, she was placing a call to the fertility doctor to announce the news that she was pregnant. After nearly four years of trying, Kelley and Justin welcomed Carter Banks Ramsey at the end of January 2013. 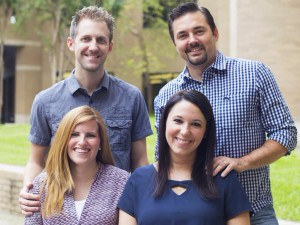 Waiting in Hope was renewed in strength and purpose after Kelley experienced a secondary miscarriage in January this year. The Lord had been waking her in the middle of the night about the group, creating a sense of excitement and urgency about its future. The same month, Kate and Kyle Lawrence became members of Houston’s First. Infertility played prominently in their testimony they allowed minister Malcolm Marshall to share their story publicly just before he baptized them.

After the service, Pastor Gregg called the Lawrences up on the platform to pray over them. Two weeks later, Kate joined Waiting in Hope.

"Infertility is so lonely," said Kate. "I wanted godly support. I tried to find a support group — one with a biblical perspective. Kyle and I wanted to be bold about telling our story, that infertility doesn’t have to take you away from God."

The Lawrences began trying to have a baby in 2011, with no success. While Kate was being operated on for a suspected uterine abnormality, Kate’s mother, Sandi, and Kyle kept watch in the waiting room. The subject of Kyle’s relationship with the Lord came up and the conversation culminated with Sandi leading him in a prayer to accept Christ there in the waiting room.

That day, not only did Kyle nail down his relationship with Jesus, but they learned that Kate was perfectly healthy. And in spite of their history of two rounds of IVF and a miscarriage (Luke), Kate sees God’s hand at work in their heartache. She sees how He is allowing them the opportunity to share their hearts with others who are walking a similar path.

"If I ever wondered if God’s hand is in our infertility, the question was answered when He led us to this ministry,” says Kate. “I feel so blessed to be part of it. I feel inspired and encouraged — and not alone. Infertility has the potential for destruction, but I see the ministry as a light and a beacon for healing."

Kelley and Justin are expecting their second child on November 22 this year, five years after their first miscarriage during the Thanksgiving season.

You Are Not Alone

Hosted by the Waiting in Hope ministry, You Are Not Alone is an evening of support and encouragement for couples facing infertility. The event is free with dinner at 6p and the program beginning at 6:30p with topical discussions, personal heartfelt stories filled with hope, and tools to leave you renewed during a difficult season. Couples are encouraged to attend together, but husbands and wives are welcome to attend on their own. Register online or contact WaitingInHopeHFBC@gmail.com or 713.957.7641 for more information about the event or Waiting In Hope.