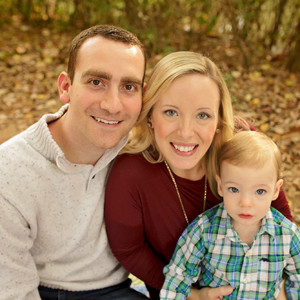 In 2013, high school sweethearts James and Hannah Lucas relocated from Waynesboro, Virginia, population 21,000, to Houston, a city of more than four million. The Lucases were invited to The Loop Campus, where the membership rolls rival the number of residents in their hometown. As they navigated being new in town, they developed sensitivity to others in similar circumstances.

“We got involved in a Life Bible Study, and volunteered for special events and other ministries at The Loop,” said James. “After James Jr was born, we both served in the Preschool ministry.”

“We found community instantly and developed a core group who became like family to us,” said Hannah. Within a year, the Lucases were Life Bible Study co-directors, and friendships they developed with other newly marrieds proved to be a blessing during Hannah’s pregnancy. “They brought meals and made airport runs to pick up our family members,” she said. “We want others to experience the same blessing and community.”

James and Hannah purchased a home in Sienna Plantation in April 2016, and were determined to get involved in the neighborhood. They tried attending the Sienna Campus and liked it, but weren’t yet ready to pull the trigger. As a compromise, they attended Milestones classes there during MidLink on Wednesday nights. They prayed for God to soften their hearts about leaving The Loop. “We asked God to help us get plugged in,” said James. God was faithful to answer their prayers when a new campus pastor was called to the Sienna Campus that they had already grown to love while attending The Loop. “Malcolm Marshall bridged the gap for us,” said Hannah. “He was the icing on the cake and the answer we needed to make the move.”

About the same time, two other couples from the Lucases’ Life Bible Study relocated to the Sienna Campus. “It helped having people we knew,” said James. And God gave them a huge blessing on their street. “Five Sienna Campus families live on our street,” he said. “The Five Oaks Clan has pool parties, events, does missions work together — and we’re getting to know them all on a deeper level.”

Hannah and James are paying forward the love they received at The Loop when they moved far from family. They stay home for the holidays and invite people new to town for a meal at their home. “Our church is a small community,” said Hannah. “It’s easy to pick out the new people, and we want them to feel they have family around.”